The unique appeal of a three-piece suit lends a stylish touch to any man’s suit collection. Individuality and your style can stand out in a crowd by including a vest or waistcoat. When it’s time to downplay your look, the vest can easily be taken off which makes it more versatile than a double-breasted jacket. A matching color fabric vest can add a new dimension to a 2-piece suit and a vest with contrasting fabric can give more character to a business suit. 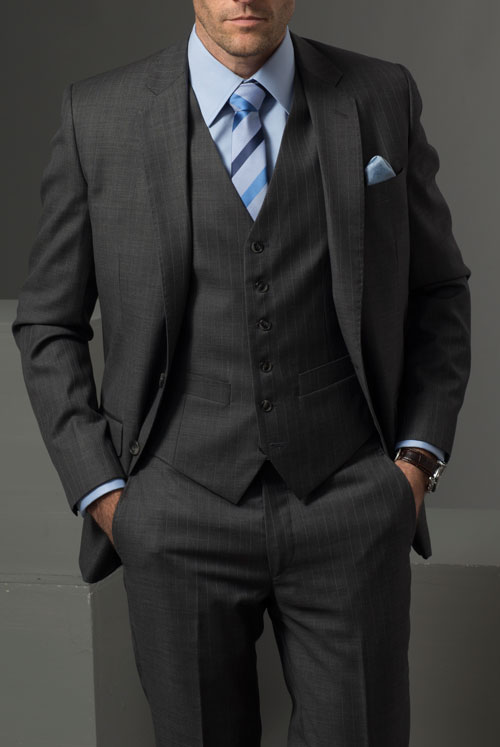 The vest should have the same fabric as the jacket and trousers. The waistcoat which consists of an odd vest and suit is not considered as a real three-piece suit. Depending on the material of the fabric an odd vest can greatly impact your wardrobe’s formality. This section includes men’s three piece suits and the discussion of the terms vest and waistcoat.

The three piece suit was popular until World War II but lost its relevance when government controlled the rationing of their clothes. Another reason why the three piece suit’s popularity declined during Post-war is when the veteran returned with more interest in the non-vented jacket, better working conditions, and the option to not wear the waistcoat. After that the days of the vented suit was never the same yet when worn properly can still evoke a unique style even today.

Benefits of Wearing the Three-Piece Suit

If you’re looking for a unique style, the three-piece suit has what it takes to keep you stylish on the go. The vested suit can easily transform your style. The draping of the fabric gives a nice silhouette to the man’s body.

The three-piece suit’s waistcoat in itself is considered more of a dressy casual form of menswear. A more formal type would be a backless vest where a jacket is needed. The rear straps are also meant to be hidden. A full vest that can cover the waist area can be worn over your tailored dress shirt. Meanwhile, the dress shirt’s sleeves can be rolled up for a turn-of-the-century look for the working class.

The versatility of the three-piece suit lies in its ability to wear the pieces separately. Simply remove the waistcoat and you already have a two-piece suit. In any case, the three-piece is still stylish, albeit slightly more costly than the two-piece.

Fitting the vest correctly can prove to be quite challenging and skilled tailors are more careful in fitting this garment and will proceed with making a dress shirt for the wearer. This enables the tailor to be more familiar with the wearer’s measurements before taking on the challenging task of making the vest. A waistcoat that is made well should be tailored properly that even areas that are hidden should fit the wearer comfortably. However, there is an exception for formal waistcoats. For formal suits such as the tuxedo, the vest is often made backless as such it is never removed and instead of a cloth, a strap at the back is added.

It is important that each area of the vest is fitted accordingly. As such, the vest should be lengthy enough to cover the waist area of the trousers. Have the vest too long and it may look a bit disproportioned and the trousers of the three-piece is measured at the wearer’s natural waist and must be worn with a suspender belt. Also, the fabric of the vest may bulge hiding it completely thereby making it irrelevant.

The vest’s topmost part should be seen at least by 2 inches when the jacket is closed. The vest should also expose the neck area including the chest and of course the tie. The neckline must be wide enough so that the vest’s fabric will not slip underneath it or hide the collar of the shirt.

A perfectly fitted vest or waistcoat must have the right silhouette or a prominent waist. Its fabric must be tapered at the point of the wearer’s body where it’s narrowest as the strap at the back can help adjust the rest of the areas.

The three-piece suit is categorized as formal wear thus it should be worn with a tie. And considering the only a small portion of the tie is exposed, its knot should be properly tied in place and not look crooked. Bulky ties like the knit ones should be worn carefully as it has the tendency to bulge underneath the vest. The tie should be long enough that you can tuck it underneath the vest yet not too long that the end is exposed beneath the vest. However, if the neck tie is long yet matches properly to the suit, you can still tuck this under the trousers.

It should be noted that it is acceptable to wear a vested suit even if the vest is mismatched with the pants and jacket. Contrasting colors can still appear elegant so long as the colors are carefully chosen, or lighter hues so it wouldn’t look too dismal. Complimenting deep colors can work well such as blue, navy or brown as long as the colors are not too bright that may appear cheaply made. Today, an unmatched vest is considered appropriate and can be worn in good taste.

The origin of the unbuttoned bottom of the vest is said to have come from King Edward VII of England. While there may be no logical explanation for it, the most widely accepted explanation is that the King started going public with his the last button of his waistcoat unfastened, apparently for a more comfortable wear. This interested the people and later followed suit, thus its significance even today. Keeping the bottom button unfastened also helps to eliminate any bunching of the vest’s fabric.

The disadvantages of the vested suit are similar to that of the double-breasted jacket’s disadvantages. The vested suit should remain buttoned for the sake of formality and to include a cloth layer around the middle part of the wearer’s body that can be hot in warm climates. The vest can act as a buffer to make short men appear taller while men with a wide torso may find it difficult to fit in it without the vest clinging to the stomach area.

In spite of all the disadvantages, the vested suit should remain stylish for a very long time. Its timeless appeal is a worthy addition to your formal wardrobe. It provides an incomparable elegance when worn and also comfort when it is removed. It is truly an essential piece of garment that should be in every man’s wardrobe.