In understanding the basics of men’s suits, it helps to take a detailed look at the suit jacket. It’s fully customizable elements are necessary to take note to ensure the suit jacket fits the wearer and highlights the person’s flattering features.

The Fit of the Shoulders

The intention of the suit jacket is to fit well enough that it flatters the wearer’s face. It should frame the face and concentrate the observer’s attention towards the face as complemented by an equally attractive shirt and tie. The shoulder width is an essential part in framing the upper portion of the torso, which includes the head. The disadvantage of heavily padded shoulders is it makes the neck and head area look a lot smaller. Meanwhile, if you make the shoulders too narrow it can make your head appear bigger than it actually is. The key is proportion. The fit of the shoulders should remain natural with a slightly sloping angle and a little bit of padding for structure. You can opt for more shoulder padding for slightly squared shoulders to provide an illusion of a taller silhouette. 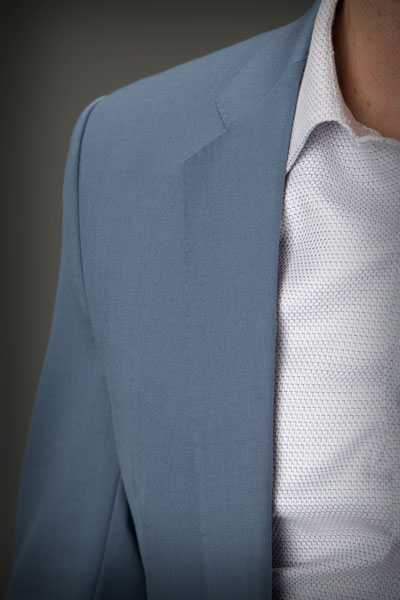 The lapels of the suit jacket are significant because it helps keep the look of the jacket balanced. It is directly attached to the shoulders and collar to give way to where the buttons are strategically placed. The width of the lapels is probably the most contested part of the suit jacket. Over the years fashion has witnessed various sizes of the lapels, from its narrowest size during the fifties to its extremely wide fashion during the seventies. However, today the lapels are now made in a more conservative width, a testament to timeless fashion.

Lapels are made in 3 different styles, apart from its varying widths:

The waist buttons are strategically placed at the end of the lapels. The rows of either 1 or 2 buttons depend on the style of the suit, whether it is a single-breasted or double-breasted suit jacket. A single-breasted suit can have 1 row of buttons, comprising with 1 to 4 buttons. A jacket with 1 button is basically designed for the tuxedo. The standard number of waist buttons would be 2 or 3. A 3-button suit jacket is a classic take on the riding jackets of the British, which gives an illusion of extra height when worn correctly.  It is usually the middle one that is buttoned up especially when standing. The first 2 buttons at the top may also be buttoned up for a more formal approach. The 2-button suits nowadays are the most popular style due to its slimming effect where the shirt and tie get more exposure. Make sure to keep the bottom button unfastened especially when sitting down.

Compared to the other styles, a 4-button suit jacket is uncommon but can be a stylish alternative for someone who is quite tall like a basketball player. With the height factor, a tall man wearing a 4-button suit can look similar to a short man wearing a 3-button jacket. Tall and lanky professional athletes often wear 4-button suits in colorful and loud patterns with all 4 buttons worn fastened. But for a truly stylish gentleman, keep it in a classic 2- or 3-button style. 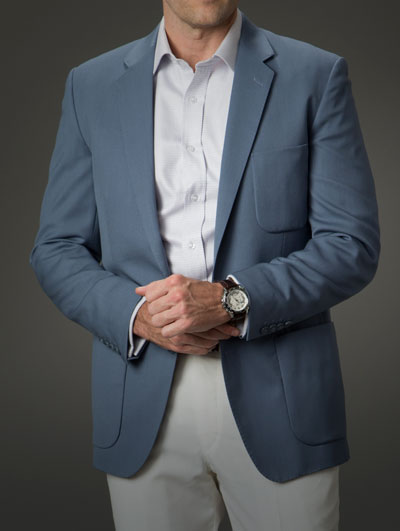 The Length of the Jacket

The suit jacket’s length highly depends on all the variables mentioned above. A suit jacket that is cut too short may show unflattering areas of the wearer’s body. Cut it too long and it might look too big, like the wearer has on a sack of potatoes. Trends are leaning toward a lower gorge with also a lower waist buttons on the suit jacket resulting in a jacket that is longer than usual because men nowadays prefer to wear their trousers around the hips as opposed to the waist area.

The suit jacket’s fit matters above everything else. An appropriate fit would allow the suit jacket with the waist button approximately below the real waist of the wearer. It should also allow at least 1 inch of the shirt cuff of the wearer to be exposed. One simple way to check for the appropriate length of the jacket is when the hem of the suit jacket just reaches your fingers, however if you curl your fingers and the hem bunches up or touches your curled fingers then you know the suit is a bit long. Another way to check for the right jacket length is to take the measurements from top of the wearer’s spine all the way to the floor, then simply divide in half. Bear in mind, the results of these techniques can still vary depending on your variables. However, both are good techniques when measuring a suit that is perhaps off the rack while a custom made suit will need a more precise measurement. In this regard, the sleeves of the jacket should also fit properly depending on the correct arm measurement of the wearer. Take note that the sleeves should never flare around the wearer’s hand. In addition, the jacket cuffs should enable the wearer some movement and therefore the width should be measured correctly for the wearer to freely move his arms.